I had to return to make my return to blogging a happy one by posting about Mandi's baptism. This post is out of order some, but that's ok... cause this one wasn't as happy.

During the Christmas season, Ryan decided to play Rudolph the Red-nosed Reindeer all through December. He started by falling and scraping the top layer of skin off a nice chunk of his nose. Everytime it was about to heal completely, he'd fall again to reinjure it. The worst of the three episodes that made him suffer this symptom throughout December was when he was standing on a little toy basket we keep beside our couch. He was standing up to the arm of the couch on this basket, when he lost his footing and fell face first into the heater vent grate. All I can say is: "Ryan with your nose so bright... won't you guide my sleigh tonight?!" 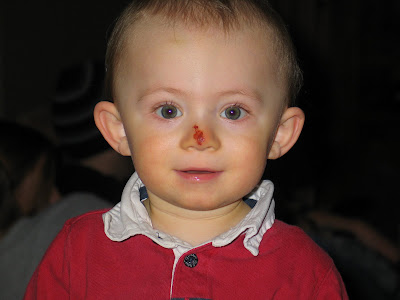 It was all a precursor to a health nightmare that would begin on, you guessed it, New Year's Day. Why waste time when you can get an immediate start on the first day of the year, after all?

It began with Kimmie waking up on New Year's Day with Croup. After two visits to the instacare for Kimmie, we started getting her on the downhill; but Ryan and Andrew caught it before we could get Kimmie over hers.

If that wasn't bad enough, Ryan contracted an ear infection on top of it... so when we took the twins to the doctor, we were given Amoxicillin for both... a stronger dose for Ryan since he had the ear infection, and Andrew got his lower dosage just to make sure he didn't contract an infection too.

Well, when it rains, it pours. If that weren't enough, Ryan's little body decided to have an awful allergic reaction to the antibioitics. 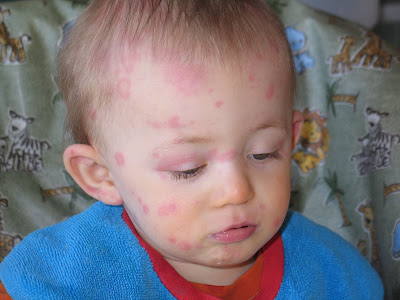 Needless to say, Gwen and I rarely got sleep for the first three weeks of the new year, and it took its toll on our bodies. I ended up with Bronchitis bad enough to knock me out of work for three days, inducing some Pleurisy afterward, from which I was given steroids to try to make it go away faster, but that just started wigging my body out, so I immediately stopped taking that. Happy Happy, Joy Joy Joy!

Anyway, we're hoping we've had our fair share of illness for at least this half of the year. We're hoping for smooth sailing for a while, especially with Spring around the corner; cause we're sick of being sick. :)
Posted by That One Guy at 3/25/2009 08:00:00 AM

Poor little guy...that 2nd picture is so sad. I hope you are all doing better....just don't get sick any more!

I know all about steroids and plurisy. And the yucky steroid response the body has. Ugh! I hope you are all on the mend!