The Night I Nearly Burned My House to the Ground

It's now been over a month-and-a-half since I've blogged... there is good reason; most of which I've been busting my butt at work trying to help fix problems after a major data-center changeover and trying to meet a deadline for some software we're working on.

Nevertheless, the wait will be worth it I promise... look at the title after all!

So I'm having a LAN party this weekend. I have one every year around this time; it's been a tradition for several years.

As fate would have it, last Friday during Friday Night Gaming, I was playing a game of Starcraft with Jarin. Right around midnight my computer took a dump and I saw the first Blue Screen of Death I've had on my computer in 3 years. Unfortunately, Death is the keyword in this sitch.

After rebooting several times, I found my computer auto-rebooting itself every time after reaching the agp440.sys file (a video driver) during Windows initial loading process.

Not knowing what caused it (it could've been anything: bad hard drive, bad hard drive controller on the motherboard, bad CPU, etc. etc.) and not really having any time or resources to troubleshoot it right now; and needing to have my computer running wonderfully for my LAN party this weekend... I pursued looking at what it would cost to snag a new motherboard, CPU and memory (I already have a new video card and hard drive to throw in there.)

This would eliminate the major potential failure points, allow me to REALLY enjoy the LAN party and provide a machine that will meet all of my requirements until we finish our basement, yard and fence.

Gwen agreed and I purchased the product. It arrived yesterday and I spent the late hours of the night gutting my old parts out and replacing with the shiny new ones.

All was going well (all things considered) thought it was taking quite a bit of time since I'm out of practice with this sort of thing (for those that don't know I was a professional technician for a Utah distributor for around 5 years and got to the point I could build 10-15 new computers in a work day.) That's not to mention I really enjoy the rare times I get to play with new hardware now to really try to make the inside of my computer a work of art.

I made it a work of something this morning.

I completed the rebuild of the hardware a little after midnight this morning. I brought it upstairs, hooked it up and turned it on.

Huzzah! Successful post on the first try - we always like that. So I happily go into the BIOS and look through the settings to make sure I have them to my liking. Through the process I'm getting stoked to see what my computer that now has 4 brains built onto one CPU core can do with my shiny new 8800GT video card.

While starting the Windows XP Pro installation process, I stuck a floppy disk in to provide drivers for my hard drives. I noticed that the floppy light was on constantly which usually meant it wasn't going to read disks for you because it wasn't hooked up correctly.

"Minor setback," I thought to myself as I shut down the computer, flipped the power switch on the back and walked around the side of my desk to start making the changes.

This is where I earn my spot on the Darwin awards nominations for 2008. Instead of being the smart technician I used to be and getting a flashlight for my office which doesn't have adequate lighting in that part of the room at that time of night... I decide to just go ahead and "feel it out" to get it plugged in correctly.

After my switcharoo, I walked back to my seat, flipped the power switch on the back of the power supply, and hit the power button on the computer to fire it up, literally.

The POST information starts appearing on my monitor, but for some reason it looks a little hazy on the monitor. Looking over to my left, I see smoke coming out every crevice of my case; especially around the DVD-Rom drive that sits above my floppy.

Immediately I start taking every possible step to disconnect power to the machine before it sends me to oblivion and takes my family along with it.

Thankfully, the Lord blessed me, even in my moment of stupidity, and I was able to avoid flames... barely.

Praise the lord that whoever makes these cables does so in a way that the melting that takes place when you plug the wrong pins together stops at the next power connector point (at least, if they don't work that way, I must've powered down fast enough to not let it spread further.) Here's the results of my not taking 2 minutes to go hunt down a flashlight because I was so in a hurry to see what this new kick-butt hardware was going to do... (click the image to see it close-up) 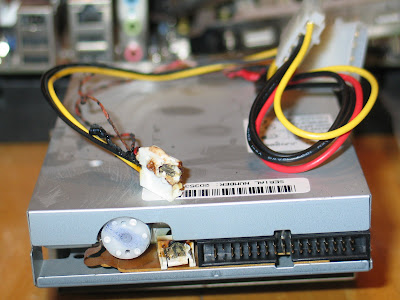 Look at the cable and the connection point on the back of the floppy drive. Yes, they're toast. Part of the power cable is completely gone... char spread partly on my desk, partly in my computer case, and partly outside where I promptly took the computer to blow the crap out.

Needless to say, it's now 2:14am here and I sit basking in the sweet sweet smell of burnt electrical wiring and melted plastic, blogging about my mayhem instead of the ten-thousand cooler things I've wanted to blog about for the last month-and-a-half. Hopefully I'll get to those soon because I have some REALLY cute pictures of my family that we had done on President's Day.

Anyway, I digress... so now, instead of getting XP loaded tonight and being able to set all my games up Wednesday night so I could be more than prepped for this weekend... I get to now spend Wednesday night re-gutting the computer to make sure it's cleared of all burnt debris; and I can confirm that no other damage was done (remember, my computer was still booting up, desptie the fact that the floppy drive didn't like where I'd plugged the power in and was deciding to get smoking mad about it...)

So yes, I'm quite confident the new hardware will kick butt (barring that I haven't singed anything else and caused permanent damage to my XION power supply.)

I certainly hope I didn't do other damage... I don't have money to replace what I just replaced. heh.

This happened once before when I was with Supercom. When the first motherboards that provided SMB (System Management Bus) arrived and we were building our first computers with them... they had a pin set on the motherboard identical to the pin sets for external USB port brackets that had been coming with motherboards for several months prior.

Recognizing the familiar pin set, and not paying attention to what this particular pin set was labelled, I ended up plugging the USB bracket into the SMB pin set. Their power pin configurations were different, so when I fired that sucker up, it smoked like my computer tonight.

Again, we thankfully caught it before the damage spread to more than just the cable. We were able to simply grab a new USB bracket and plug it into the correct place and the system worked flawlessly.

Pray for me that the same happens with my new hardware. I'm really not in the mood to have more mayhem than I already have.

And I hope you've been able to laugh as hard at this entry as I hope to be laughing at it on Friday when I re-tell it to my LAN party guests that haven't already heard the story. Right now it's not very funny...