Thoughts About This Year's Election

1. Educate Yourself
2. Pick Your Candidate
3. Vote

1. Educate Yourself
When I say "Educate Yourself" I'm not talking about watching TV and learning about things through that medium alone. As you may or may not know, they only give the limelight to the two "major" parties.

There are 7 sets of candidates running for President/Vice President this year. You need to know about each and every one of them to truly be an "informed voter."

I'm providing links to all of their websites so you can go find out what they're about on your own without media influence (well, unless you find YouTube videos or other places with these candidates on television programs, etc.)

Remember, there are SEVEN candidates, not TWO... learn about them all, then:

2. Pick a Candidate
When I say "Pick a Candidate" I don't mean for you to fall under this bullcrap notion that I've heard all year long that "Well, I really like one of the 'third party' candidates, but they'll never win, so I have to vote for the 'lesser of two evils'..."

I've heard this from more people than I've actually heard people wanting to vote for John McCain or Barack Obama. Think about it, people... if everyone voted for the person they really think should be President (including write-ins) this attitude wouldn't exist and the elections would go MUCH differently than they do now; they'd go how they were MEANT to...

If you truly want to make your voice heard, vote for the candidate you really think should be President; especially if they are third party! So, again, educate yourself and pick the candidate you feel is best suited for this election... (and that's fine if you think McCain or Obama is best-suited... but please DON'T vote for them if you like another candidate better; VOTE FOR YOUR CANDIDATE!)

3. Vote
The one thing the media-at-large has done RIGHT this year, is to portray how important this year's election is. I don't need to spell out for anyone how many interesting (and scary) things are going on in our society right now. If we truly want "change" we need to shout out the message by voting for the APPROPRIATE candidate (see section 2 above.)

I'm not going to tell you who to vote for; and I'm not going to reveal who I'm voting for... because you need to educate yourself and make that choice. I'm actually still in the process of making mine... I'm about 90% sure about a couple of people I'd like to vote for, but am still making sure I read up on everyone and make a truly informed decision. I exhort everyone else to do the same...

... and not just for Presdiential/Vice-Presidential candidates; but for everyone you'll be voting for on 04 November.

Our family is a huge fan of the High School Musical series. We're excited to be taking the kids to the first showing on 24 October 2008. 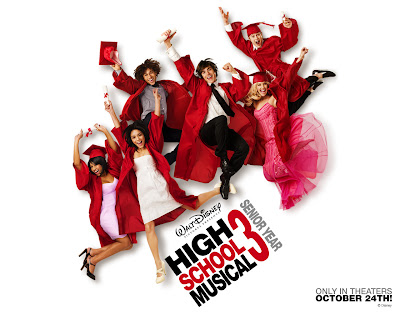 For those of you unfamiliar, High School Musical is a series of films (the first two made for Disney Channel) by director and choreographer Kenny Ortega. We've been a fan of his work since Newsies. If you haven't seen anything he's done, we'd highly recommend checking out Newsies, any of the High School Musical movies, and/or The Cheetah Girls 2. He does an amazing job taking huge groups of young talent and making them shine. The dance numbers in all of these movies are incredible.


The films are extra special to us because the films have been made here in Utah.