Reason #42 Why I Hate Windows Vista - Some CDs appear blank to Vista's Windows Explorer, but read fine when done from a Command Prompt window

Ok, most of you have heard my gripes about Windows Vista verbally, so the title doesn't make sense to those of you that haven't.

I've decided I'm going to start ranting about the problems I run into with Vista here in hopes that if enough people do the same (and believe me there are plenty out there...) Microsoft will get some of this crap fixed.

I have two older video games that I've tried to get to work with Vista that have previously worked with older Windows operating systems.

Two of them exploit a very interesting anomaly in Vista. If I put the CD in, it's name won't show up in the Vista Windows Explorer interface; though it will show the size used on it. If I try to Open/Explore the CD, I get the blank CD dialog that asks how you want to format the disc.

If I open a Command Prompt Window, on-the-other-hand, and do a "dir" command; I can see the files just fine. I can then proceed to launch the install of the game.

How did I find out about this? Luck of the draw... does it mean the given game will work? That I'm not sure... I'm installing one as we speak (Star Wars: Jedi Academy.)

The other I've tried is Titan Quest. Titan Quest works until I click on a merchant. Once I do that, I get booted out of the game and to the Windows Desktop without warning or reason why it did so. I'm not sure if that is a related bug, but I can reproduce it consistently on my laptop and find it equally annoying.

I'd love to hear from others who have had similar experiences; and to hear from those that don't have the same issue with their Jedi Academy and Titan Quest discs.
I have an Asus G2S-A1 laptop with Vista Home Premium.

Incidentally, both games work without these issues in Windows XP Pro and Windows 98SE (Jedi Academy) on multiple desktops in my home.

Behold Our Little Ones; Blessed are the Children 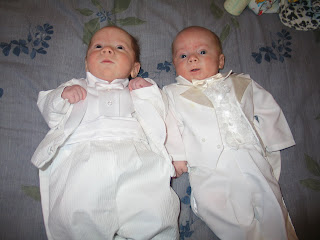 We had the wonderful opportunity of blessing our twins in Church last Sunday. It was a very spiritual and amazing day; filled with family and friends who have been supporting us through the months of trial we went though to get them here.

And look at what a blessing they are; glowing, radiant, wonderful. Newborn babies are an interesting phenomenon. They can send you to relaxville simply by cuddling them (which is a problem when it's time for a late-night-feeding... they turn me into Jello-Head Bob); can bring so much peace and joy by their quirky smiles and cute cooing.

We're extremely grateful to have Ryan and Andrew in our lives; and to have strengthened so many bonds with so many people who have sacrificed of themselves to help us out. We hope you'll ever feel of our gratitude for you and your friendships. 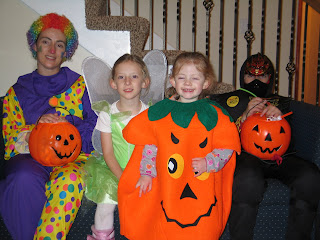 Halloween 2007 was fun this year... though we were cramped for time in getting anything done for it (for obvious reasons.) Gwennie was a clown, Mandi was Tinkerbell, Kimmie was the Great Pumpkin, Brennan was the Ninja of the Dark Dragon and I was the Father of Twins...

Yeah, imagine that... hard costume to put together; wake up in the morning after a night of taking care of two infants and the costume makes itself. Any excuse to wear pajamas to work...

Kim had some "Christmas Story" moments where she'd fall and kick her little legs, unable to pick herself up again. It was quite humorous (bless her heart.)

Thankfully, this year was devoid of any
"Chocolate Incidents."

The pumpkin carving had to be done in two shifts; the first being our Family Home Evening a couple days before Halloween, in which we basically had time to gut the suckers.

Gwen finished them Halloween day with the kids; and the Sonic the Hedgehog ROCKED! I wish we'd had time to finish that one on Monday, because I could've won our ProPay pumpkin carving contest... Oh well, it was still fun to wear pajamas wo work.

Here are the works of art: 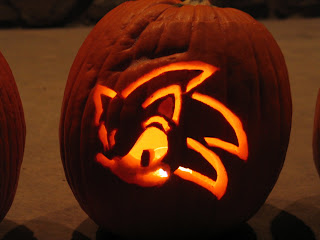 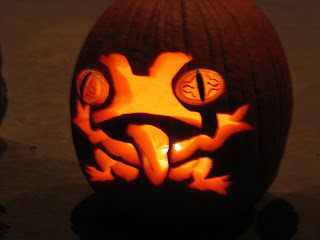 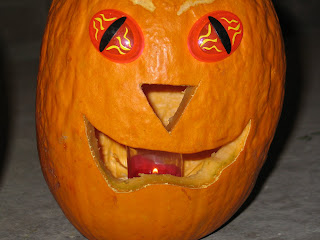