Of Mice and Jedi - Disneyland Vacation: Day 3 (Return of the Jedi)

We were pretty wiped out after visiting the entire Disneyland park during our first two days. We originally planned to hit California Adventure the third day, but opted to just casually stroll around Disneyland and ride any rides we'd missed and repeat any rides the kids wanted to ride. We ended up back in Fantasyland where we rode the Snow White and Pinocchio rides, then headed back to Tomorrowland for one more Buzz Lightyear ride and some souvenir shopping.

So you've probably been wondering why I entitled this series of posts "Of Mice and Jedi"... today it will finally make sense.

Brennan really wanted to see the Jedi Training Academy show in Tomorrowland, and we saw the end of it before the Space Mountain trauma on the first day; so we decided to catch the whole thing. 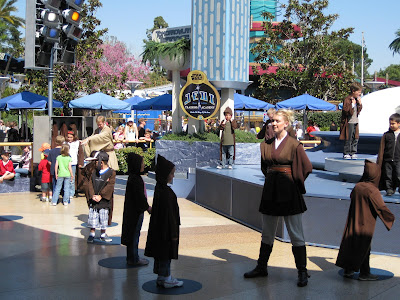 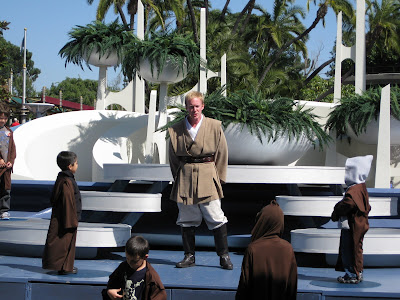 Mandi and Kimmie both really wanted to get trained, so Brennan and I tried to hold them up to get noticed in the crowds of screaming kids all trying to get their chance to master the ways of the Force.

Finally, on the Master Jedi's third pass, he called on our "levitating princess" (Mandi) to join them. Unfortunately, Kimmie didn't get picked, and there was much weeping, wailing and gnashing of teeth. I'm surprised she didn't go full Sith before the show was over.

Nevertheless, the rest of us had a great time watching as Mandi and her fellow Padawan younglings learned how to use a lightsaber. 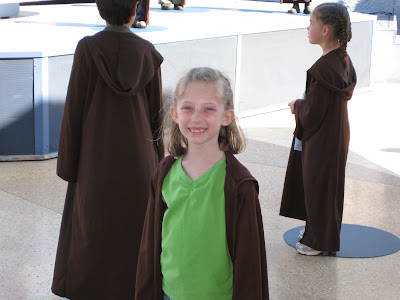 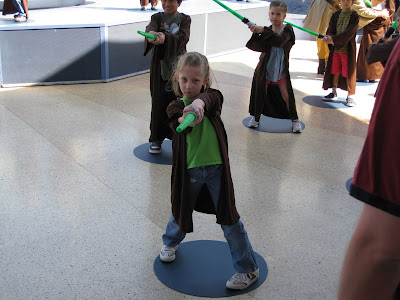 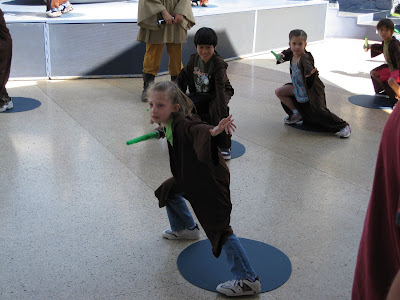 In the middle of their training, two Stormtroopers invaded the scene, and raised a platform with Darth Maul and Darth Vader on it. After Lord Vader failed to convince the strong minds of the young Jedi to come over to the Dark Side, each Padawan had the opportunity to engage one of the Sith Lords. 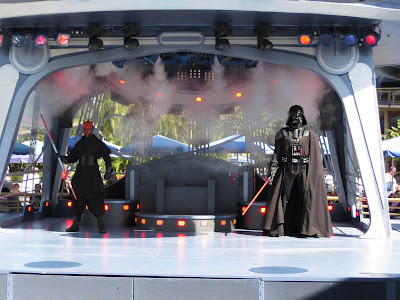 Mandi engaged in a duel with Darth Maul and successfully executed her training, rivaling the sabersmanship (is that a word?) of the red-faced Sith.

After successfully defeating the Sith and inviting those of the Empire to leave the training grounds, the younglings all went up on the stage and were pronounced official Jedi. Go Mandi! 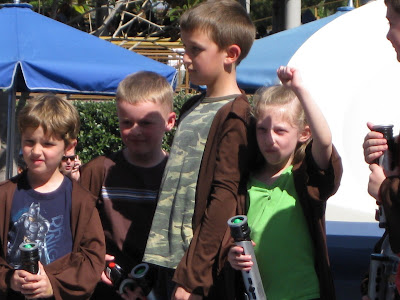 Afterwards, the kids just HAD to have a lightsaber, so we went to the nearby souvenir shop and let them build their own. We bought a few more items, then headed to Downtown Disney on our way back to the hotel, so we could rest up for Fantasmic later that night.

We stopped in the Lego store in Downtown Disney and had fun seeing all of the huge creations they made from legos, including a 15-foot tall (maybe taller) giraffe. The kids favorite, of course, was the Lego Darth Vader, in front of which they proudly activated their lightsabers and posed for a picture. 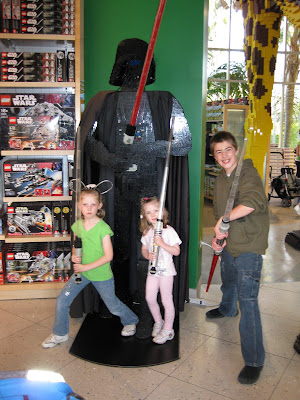 We took the long walk back to the hotel, and were glad we did, because we saw another cool Disney structure and some fun Disney gardening on the way back. When we returned to the Hotel, the kids watched Disney Channel while mom and dad took a nap. (We're old...) 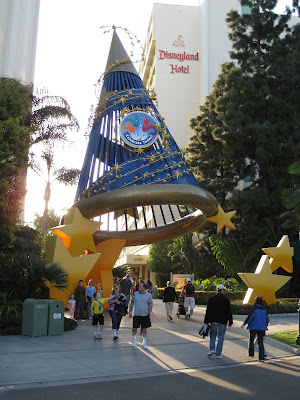 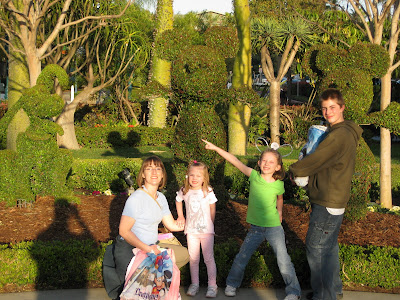 The highlight of our day/night was seeing Fantasmic. If you haven't seen it, I highly recommend it on your next trip to Disneyland; it's amazing and magical. They do some fun effects with water, fire, lasers and more; and have a really fun scene with the Jolly Roger floating around the riverbend of the Rivers of America, loaded with characters from Peter Pan... including a fight scene with Peter Pan and Captain Hook up in the sails. It ends with a fantastic curtain call of a boat-load of Disney characters. It's literally a boat-load, as it is the Mark Twain Riverboat, piloted by Steamboat Willie Mickey. I tried to capture a good picture of it, but failed miserably, so you're stuck with the best one out of the bunch.

The music lived up to its name, fantasmic. I loved it so much I came home and ordered the CD (which included the Main Street Electrical Parade music... double bonus!) 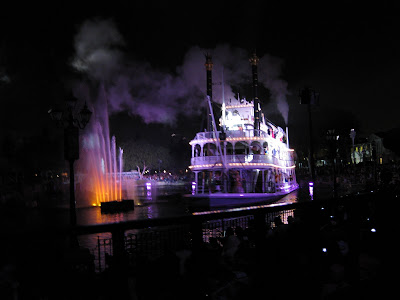 Not only was Fantasmic enjoyable, but we paid the ghastly fee to get preferred seating, which offered us the ability to not have to waste several hours holding our spot for the show, as well as treats and free drinks through the production. The treats were some of the tastiest gourmet goodies I've ever eaten. Soooooo yummy! 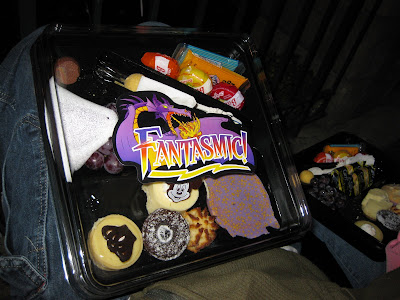 Near the end of the show, Gwen had to take the girls to the restroom, and they weren't back when the fireworks were finished. Brennan and I hit the restrooms after and started looking for them. It took us all about a half-hour or more of searching for and missing each other before we finally reunited. We're thankful that was the only bit of "lost" drama we had during the trip... It wouldn't have been a problem, 'cept Gwen's cell phone had been left in her purse (which was still with me) instead of being in her pocket. Lesson learned. heh

Pooped again, we headed home to rest up for our Character Breakfast in the PCH Grill on the main floor of the Paradise Pier the next morning. We thought that would be a fun way to end the trip and still have a little of the Disney experience before our return home.

Awesome! That looks like so much fun. I never went as a kid and had a very short (1 day) visit a few years ago. We are going again in a few weeks. Any advice from your experience?

You're going during the mega-busy time, so your wait times in line are going to be very long. Make sure to utilize their "Fast Pass" system as much as you can.

Rides that do Fast Pass will let you go get a ticket for a specific time (based on your admission ticket)... you return to the ride during your allotted time and you can skip to near the front of the line for that ride.

You can only carry one Fast Pass at a time per ticket, so try to plan them wisely.

If you can see Fantasmic and/or the Main Street Electrical Parade while you're there... make sure to do so. They rock!

I hope you have fun! It really is a magical place.