With all the talk lately about Def Leppard, Poison, Depeche Mode concerts and more... I couldn't resist throwing up my own little throwback to the 80's: 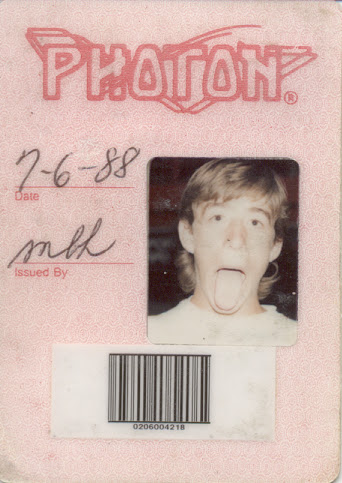 This one goes out to my good friend Russ Peacock. Remember when, my friend?! Good times... good times... :)

For those that don't know, Photon was the first laser tag arena in Utah. It was located across the street from The Sports Park (remember that?) just West of I-15 near the 9000 South exit. Its building has since been several other things, including Paintball Planet, but I'll always remember it as the place Russ and I used to go kick trash and take names as laser tag champions; or so we thought... til the one day we got ganged up on! I know you remember that one, Russ.
Posted by That One Guy at 8/25/2009 10:26:00 PM 4 comments:

Labels: Humor, Laugh At Yourself

The past few months have been quite a whirlwind for me. I've been MIA from the blog due to being way tied up in 2 jobs, my 11-year-old scout leader calling and spending time with my family.

This past week has been an especially "high category" storm, if you will, because on top of all that, my mother was admitted to the hospital. Without divulging details, we almost lost her this week, but she's made some drastic improvements and hopefully she'll be pulling through very soon and will recover as well as possible over the next few weeks.

During this, I also had the blessed opportunity of attending the memorial service of a good friend of mine from high school, and true American Hero, Jeremy Clawson. The words spoken in honor of this great man moved me deeply.

Both of these experiences have caused me to stop at times in deep reflection on my own life; and how I live it.

I've also been seriously reminded at how much our relationships should mean to us. Life's too short to let the little things get in the way. I need to make more time to visit my loved ones.

Most of you that know me know I do alright keeping in touch with friends. I thank the Lord for blessing me with knowledge of technology and a passion for staying in touch, as the internet and its many tools allow me to do so quite easily. It still consumes time, but it's worth every minute.

I got to talking with my friend Aaron from Jordan High at the reception following our friend Jer's memorial service. We conversed about how sad it is that some our friends feel like they can't attend reunions for various reasons.

I have to say something about this... I've attended a lot of reunions, many of which have not been my own (thanks to being a part of the Jordan Alumni Association), and I've yet to see someone come to a reunion and regret that they did. There is always someone (or several someones) they haven't thought about that they reunite with and are so glad they did.

My cry out to the rest of the world is to please not let one bad relationship from your past, or even a handful, keep you from enjoying the sweet reunions you could be having with the tons of other friends you did still cherish back then. Instead of letting that keep you from going, go with the attitude in mind that you'll either reconcile the differences if you chance to encounter that person, or that you'll avoid them and interact with the others you wish to. But make the effort to go, you'll be glad you did.

My challenge to those who aren't so excited to go their reunions: Make the effort to go to the next one you're invited to, and give it at least 10 minutes of your time with a positive attitude. I guarantee you'll find someone in that time that will make the whole thing worth it (assuming you haven't arrived before everyone else... heh... make sure the 10-minute timer doesn't start until the majority of the guests have arrived.)

A few weeks ago, a Utah's PRIDE reunion was put together by my good friend Mary Pearson and others from her group. It was for the final two years of the program, 1994-1996. Since my years were 1989-1991 and I'd only spent time with the groups until I left on my mission in 1993, I figured I wouldn't know enough of the attendees to justify my going.

Since I had other things going that day as well, I assumed my wife would prefer to have me home to help with the kids. Well, the reunion was broken into two parts that day; an informal lunch in the park that all family members were invited to, and a dinner that night that only the PRIDEsters and their significant others were invited to.

After the lunch event, some had requested that I come to the dinner... I was called by my good friend Jarin who convinced me to go. Gwen gave me the green light, so I went; again nervous that it wouldn't be rewarding for me because I thought I wouldn't know anyone.

I was happy to see that I knew at least half of the people there! I hadn't realized that many of them were people I hooked up with from running the PRIDE site, or knew them from being friends with their older siblings who were also involved in PRIDE.

The reunion was very enjoyable for me, and even though I hadn't experienced things with their group; I still loved watching their slideshow and felt the same feelings remembering the experiences I had with my own groups (and the few years after I was still involved with.) True, the situations were different, but the feelings fostered and cherished as happy memories as a result of those situations is exactly the same; and it carries on exactly the same... because those are the things that shape our character going forward.

I may have mentioned this in a prior post, but it's worht saying again... When it came time for me to leave this particular reunion, I'd already become emotional about how wonderful it is to reunite with old friends... no matter how often I do it, the same intense happiness is there, it never dulls and never goes away. I found myself inclined to stand up and say a few words to the group, despite the fact that I wasn't technically a part of it.

I asked the group to raise hands for all who had attended this reunion from out-of-town. I don't remember how many there were, but it seems like it was 1/3 to 1/2 of them, if not more. I was amazed to see that many hands, as it was a testament to me at how important those relationships were/are to those great people. It literally brought tears to my eyes, and I had a hard time expressing my thoughts/feelings to them. I hope whatever I said came across right and they got the spirit of what I really wanted to say. I think they did.

The point was that these are the things we take with us. These are things that mold who we are. Our relationships define us; and they're too important to take for granted... because we never know when these loved ones will be called to return to their Maker, and we won't have the opportunity anymore on this Earth at this time to enjoy those sweet reunions.

Make the time and the effort to get out of your comfort zone and take advantage of those opportunities. Don't worry about forgetting people's names... we're all in the same boat, we all understand... ask them to remind you, and after the 30-seconds of awkweirdness, you'll be laughing and smiling about old times again. Getting over that first awkward moment is the hardest part... but PLEASE don't let those kinds of things stop you from going. Again, life's too short; it's not worth it.

I've veered off into reunions, and typically those are usually big family or high school reunions... but they don't have to be.

I'm known for trying to find out when friends are in town from out-of-town, or I've discovered someone in-town that I haven't seen forever, and then trying to throw something informal together to get a bunch of common friends together to see that friend. It's probably selfish of me, but it's a dang good excuse to get together, and I don't always want to keep it to myself. I cherish these get-togethers so very much... you can probably see it in my face when I post the pics.

I keep telling people, I wish I could bottle those feelings up, and share them with all of you individually. I know that if I could, there probably wouldn't be a one of you that would resist an opportunity to get-together with an old friend again. But I can't, so the best I can do is try to convince through posts like this... yes it's a soapbox, but one I'm more than happy to get on from time-to-time; it's that important to me.

I've said it before and I'll say it again. This life is all about people... and life is too short to let these opportunities to enhance/embrace/reunite these relationships pass us by. Make the time/effort to rekindle relationships with those you love, and to reconcile any differences that might keep you from doing so.

He/she who dies with the most friends, wins. :)