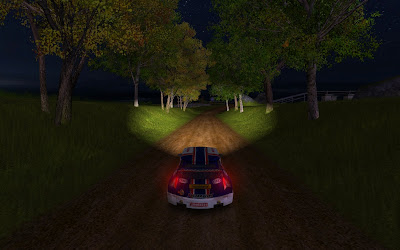 TrackMania United Forever - Quiet Ride Down a Country Road at Night
Many people dread April 15th (at least if they live in the United States and they owe the Government taxes...) but not me.

Nadeo, the game's creator, took the United engine for the Stadium environment and put it into TMNF. Basically, Nations Forever is like taking Stadium straight out of United and put in a standalone game. What makes this great is that owners of TMUF (which contains an additional 6 environments spanning the entire TrackMania series) can connect to TMNF servers without having Nations Forever installed (prior to this release, one had to install both TrackMania United (TMU) and TrackMania Nations (TMN) to play both.)

That's the first really exciting piece of goodness I discovered when I updated my game to TrackMania United Forever... but wait, there's more!!!

Some of my favorite additions:


I'm sure this is just the tip of the iceberg; as I only got to play for a couple of hours tonight.

I will say this: Nadeo has put a TON of time and effort into enhancing this game and it shines like the sun. I can't believe they made it a free upgrade. I'd pay for it... in fact, I'm considering making a donation to the cause anyway; the enhancements are more than worth it.

I can't wait to see what else lies ahead as we play TrackMania Forever... you know where you'll find me late Friday Night! (Dang I need to get some time to update that site... holy old...)

(By the way, if you're interested in getting into the world of TrackMania; contact me first... TMUF has a feature where I can invite friends to get the game... and if you get it from the invite using the same email for your account, I can be your sponsor. I'm not sure what that means, but I'd like to find out... so let me know.)
Posted by That One Guy at 4/16/2008 12:20:00 AM 1 comment: