... that the Google Toolbar's Popup Blocker makes sure to alert you that it's doing its job the first time it intercepts a Popup ... by displaying a Popup?! 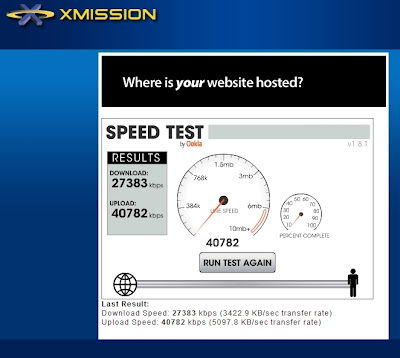 This screenshot brought to you by a business client on UTOPIA with Xmission as a provider and a 30Mbit/30Mbit package for $125/mo. (Residential clients get 15Mbit/15Mbit for $39.99/mo - see below; and notice that it's ~1MB faster in both directions than what the package states.)

Both pictures are courtesy of two of my friends located in Murray, Utah.
I'd like to see Qwest and Comcast even ATTEMPT to make that happen on their current systems as they exist today. It's time to ride the light, folks... the light that runs on FIBER OPTICS!!! You know what they say: 9/10 doctors recommend fiber for relieving internet constipation.
Notice the upload speed is nearly 10.8Mbit faster than what the package states they'll get... 10.8Mbit alone isn't even available on Qwest's or Comcast's networks...
Qwest offers a 7Mbit down package, but it's ridiculously overpriced and only available to people that live within spitting distance of one of their "COs." Then you must hope and pray that the planets are aligned and the moon is full to be able to get that kind of connection. Otherwise, it's 256k-ville or 1.5Mbit-land for you; still at the skyrocketed price compared to pricing on UTOPIA providers.
Comcast cranks their download connections up more - to around 8-9Mbit for over 1.5 times the cost of UTOPIA providers... and their uploads are only around 1Mbit... so 15x LESS the speed for more money... hmmm, that's smarts. But what do you do when you don't have a choice?!
Did I mention that all of my neighbors are also on Comcast, because our only other option in my neighborhood is a lousy 256k connection. After all, that's all Qwest promised the city of Taylorsville in 2004 when they convinced the City Council to pull out of UTOPIA... no kudos to the short-sighted Taylorsville City Council that somehow lost the vision they once had.
That said, I only achieve the full speeds listed above on the Comcast system when I'm using it at 3:00am after all the neighbors have gone to bed and aren't using theirs.
Ah to have the splendid best of both worlds... where I could have a dedicated line like Qwest provides (not shared with neighbors) - and speeds much greater than Comcast offers and for a lot less money... That's why I'm moving out of Taylorsville and seeking residence in UTOPIA cities.
Remember folks, it's not just about faster internet... it's about the future of all your communications: phone, TV and internet (even though phone and TV are even now being handled over internet as well); and it's about competition and options... something the Qwest and Comcast monopolies haven't had, nor provided. Instead they continue to charge us premium prices for lackluster services... and provide little to nothing in terms of customer support... Don't believe me?
Read my story about dealings with Qwest during my fight to keep Taylorsville in UTOPIA.
Read about another friend's unfortunate experiences with Comcast.
I really hope that Qwest and Comcast will either start bringing their systems up to handle the technology we need to get our state and our country back in the technology race; and enchance our quality of information connectivity... or get onboard and start providing on UTOPIA so they can give their customers the same speeds they're currently charging for.
Want to know more? Check out UTOPIA's web site and then start hounding your City Council to help them understand the benefits of getting it in your area.
Wish me luck in my quest for UTOPIA. Start your own and help grow the list of cities I can look for homes in!
Posted by That One Guy at 5/20/2007 10:20:00 AM No comments:

I'm slothful. We had our twins' ultrasound last Tuesday and I'm just now getting around to scanning in the ultrasound pictures. I was hoping to video capture some of the video we got, but that's going to take much more time than I have right now; so it'll have to wait.

Anyway, we found out that the twins will be strapping young men (much like their father... er...)

We got to see them both very well and I'm happy to report that all appendages are present and the babies look completely healthy. God willing, they'll stay that way through delivery and beyond. We're grateful He's blessed them to be such thus far.

Baby B, lovingly known as Thing 2 (the one on the top bunk this round) was moving around like a cow in a tornado. We almost didn't get to discover his gender; but the skilled and cunning ultrasound technician outsmarted him. At one point, it looked like Thing 2 was trying to taunt us with a "Neener neener, you can't catch me and find out what I am!!!" His hand was up by his ear with mouth wide open in a mocking fashion." He must get his sense of humor from mom. :) The same shot also makes it look like he's a pirate... The screen captures don't quite do it justice, but you'll get the idea. And Thing 2 must've been prodding Thing 1, because it appears he was doing the same thing when we got his face shot from the front. 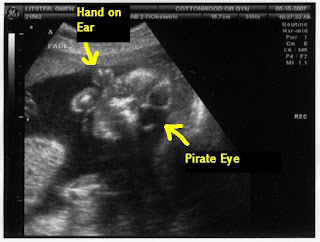 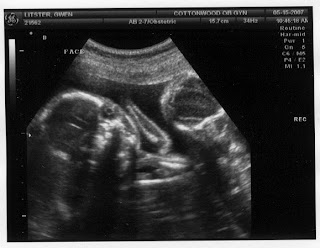 We thank everyone for their excitement for our new adventures. We'll keep you posted on how things are going. Until then, keep the name suggestions coming... the ones in the comments on the "Womb Raider" post were a hoot!

A few weeks ago, I'd heard Blizzard Entertainment was going to be making a huge announcement in Korea.

Korea, incidentally, is where the still popular video game Starcraft is massively played. It's so popular there, they televise tournaments for it.

Naturally, it was my hope that being the 10-year anniversary of the release of the original Starcraft the announcement would be about a Starcraft II.

I'm happy to announce that Starcraft II is indeed a reality; and it looks to be incredibly cool.

One thing I'm really excited about is the fact that Blizzard states in their FAQ that they're shooting for a "T" rating on the game. Morals seem to be decaying with increasing speed in the entertainment industries, so I'm hoping this will be kept relatively kid-friendly.

I don't care for the swearing (Starcraft had it too) but I can handle it if it's kept to a minimum.

There is a picture on the artwork page that has me slightly worried, and I hope that kind of thing doesn't make it into the game; a picture of Kerrigan (a genetically manipulated Terran "Ghost" woman that was assimilated by an alien race called the "Zerg") and became the "Queen of Blades."

What the picture depicts is interesting though. I was hoping that if Blizzard did a sequel that the plot would offer a way that the Terrans find a way to reclaim and return Kerrigan her former self. The picture suggests this may very well happen in the game. I just hope they depict it in a more tasteful way that doesn't involve mostly nude shots with strategically covered parts... it's really not necessary.

Aside from that, the game looks incredibly cool and I can't wait to see what all they're going to do to the game.

Our Friday Night Gaming crew still enjoys the original game on several occasions; it's a classic.

Kudos, Blizzard for not solely dumping all your eggs into the World of Warcraft basket and leaving them there. Hopefully you'll resurrect the Starcraft: Ghost project that got shelved a time ago too.
Posted by That One Guy at 5/20/2007 09:34:00 AM No comments: