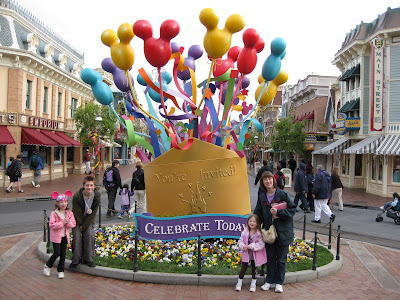 After an exhausting first day at Disneyland, we had a pleasant night's sleep at the hotel (which is rare) and woke up early and had breakfast delivered to our room so we could hit the park the instant they let the "Magical Morning" guests in.

Despite the fact that we already covered the two sections of the park that were open early, we still got to maximize the extra hour.

We weren't first in line to get into the park, but it actually served advantageous. The minute we stepped into the park and were came around to Main Street, we saw 6-8 Disney characters coming out to sign autographs and let people take pictures with them. We happened to be right there when Minnie Mouse came out and were 2nd in line to see her. Likewise, as soon as we were finished with her, we were able to get autographs and pictures with Pluto, Goofy, Chip and Dale. 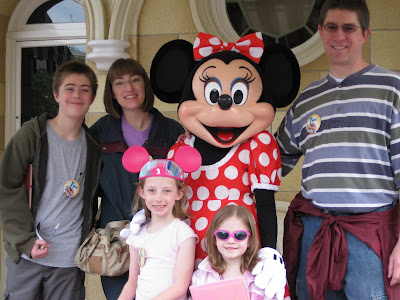 The characters were a blast. Pluto signed all of the kids' books on his nose; and Goofy, well, he was true-to-form. 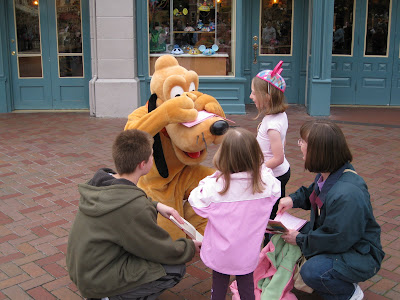 Brennan handed his book to Goofy. He promptly put it on Brennan's head and began signing. Then it was Mandi's turn, so she handed her book over. Mandi was wearing her Mickey ears that morning, so for Goofy to sign the book on her head, naturally he would need the ears removed. With great finesse, he swiftly knocked her ears down over her face... then straightway put Mandi's book on BRENNAN'S head and commenced signing. *CACKLE!* It was hilarious and the kids loved it. 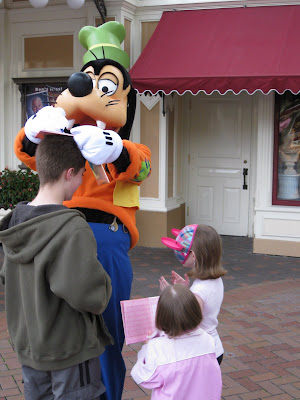 After the autographs, we headed over to TomorrowLand again to let the kids ride the Buzz Lightyear ride and the rockets again. Then we realized we had a shot at being first in the Princess Faire line, so we hauled butt over in that direction. Crew members were standing guard near "It's a Small World" to keep guests from going further into the park since they hadn't opened those sections yet. There was already a plethora of people present, so we were bummed that we missed that boat. However, we soon discovered that some were there for the Small World ride, and others were there for Toon Town. The crew member asked us to form distinct lines and we were fortunate enough to be third or fourth in the Princess Faire line. Booya!

This was one of the most important factors in our Disneyland adventure, as Mandi and Kimmie are quite fond of the Princesses. You'll remember from Day 1 that we were told the line was a 2.5 to 3 hour wait, so we averted that crisis. The other catch was to get there when the "right" princesses were present. They rotate Disney Princesses every 45 minutes. We were hoping that Mandi and Kimmie's favorites were there, cause there was no way in a-place-very-much-opposite-of-the-Magical-Kingdom we were going to torture ourselves with a return trip to the longest line in Disneyland.

The heavens were smiling down on us that day... As the girls got to visit Snow White, Aurora and Cinderella; their three favorites. This was the most magical of the character encounters for us, because it wasn't as rushed as the other autograph/photo moments with other characters. They actually got to chit-chat with each princess for a couple of minutes before moving on to the next. Magical. 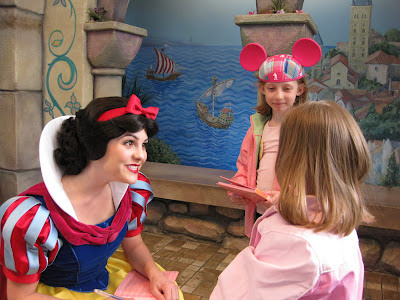 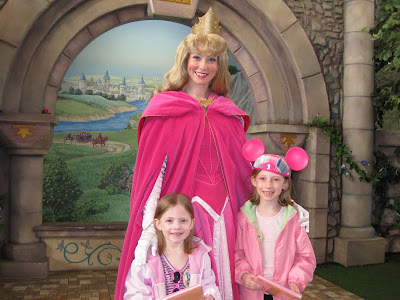 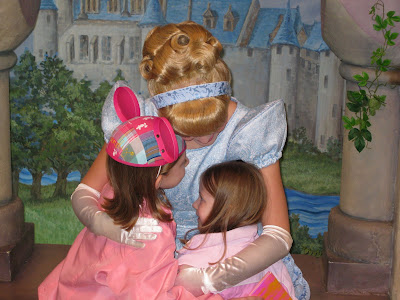 We ran back to ToonTown (since it's next-door to the Princess Fantasy Faire) to get Mickey's autograph, since we hadn't had books the day before; and we wanted to beat the crowds there. Of course he had to hug on Gwen, because, you know, she is his 2nd-to-Minnie. After ToonTown, we stopped for a treat near the Princess Faire and made our plan-of-attack for the rest of the day, as we still had a lot of park to cover. 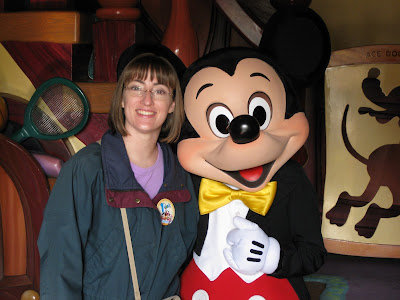 We headed over to New Orleans Square where the Pirates of the Carribean is. That is one of my favorite rides and it was cooler than I remembered it. For those that don't know (or don't remember...) it's a boat ride, and it starts by floating you around the back of the Blue Bayou restaurant, then up a hill and down into the main parts of the ride, what feels like deep below New Orleans square. The ride was longer and cooler than I remember, and has been updated to reflect characters from the movies.

My favorite part was when we rode past the pirate ship attacking the fort, cannon fire being exchanged back-and-forth. I was sitting in just the right seat, as I felt a cannon blast whoosh through my hair! That, by itself, made the whole trip worth it... dang that was a cool effect. :)

We were fairly close to the Indiana Jones ride at that point, so I dragged the family in that direction, and we made a short stop through Tarzan's Treehouse. When we got to the Indiana Jones ride, Brennan and Mandi were too jaded to ride (Space Mountain trauma from Day 1), and we found out Kimmie was too short. So I was denied the ride I wanted to ride most while we were there; as it wasn't there when I was a kid.

Disneyland does a special pass for parents that have to stay behind with kids to be able to immediately board the ride after the other parent goes first... Unfortunately, we learned about this AFTER we came home... anger ensues.

In my angered state... we wandered over near Aladdin's Oasis, and happened to see Aladdin and Jasmine signing autographs, so we jumped in line. We fortunately were the last to get autographs/pictures before they had to leave... but unfortunately, they were very apparently in a hurried state and rushed the kids' signing and picture. That was the only thing close to a bad experience our entire trip (and it wasn't even a bad experience, really) so I was very thankful for that.

Since the kids weren't too into wanting to rides in Adventureland, we decided to head over to Critter Country and nabbed some lunch. After lunch, we hit Splash Mountain. Dang that is a cool ride. It was much longer than I remembered it and just as fun. We hit it just before the line got REALLY long. The kids said they enjoyed it, but when I recommended using the Fast Pass to do it again, they're all "no, my tummy needs a rest... blah blah blah." Repeat goodness denied.

We saw Winnie the Pooh and Rabbit signing autographs, so we figured that was something mellow the kids could handle... besides, we were on an autograph frenzy today, so why not fill the books! We jumped in line; and met a cast member from Salt Lake City who had fun talking to the crowd as they waited in line. He was a walking databank of Disney trivia. Meanwhile, in the not-so-hundred-acre-wood, time came for the characters to rotate, so instead of getting a picture of Winnie-the-Pooh with Gwennie-the-Pooh, we got to meet and take pics with Tigger and Eeyore. Not a bad trade. 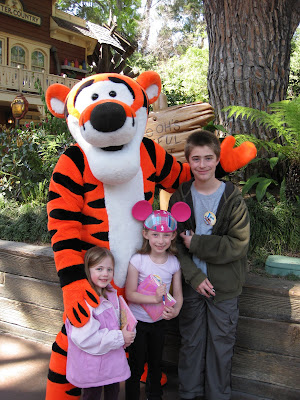 We wandered over to Frontierland, where any hope of riding any "scary" rides for Brennan and Mandi had past. Gwen and I both wanted to hit "Big Thunder Railroad", but Kimmie was the only child brave enough to ride it. Gwen told me to take Kimmie and she'd go after me (wish I'd known about the "No Parent Left-Behind" pass! Anger ensues again...) By the time Kimmie and I got off the ride, Gwen, Brennan and Mandi had wandered over by the Mark Twain Riverboat. When we met up with them, who was to appear, but Woody and Jessie from Toy Story 2! More autographs, more pics... uh booya! 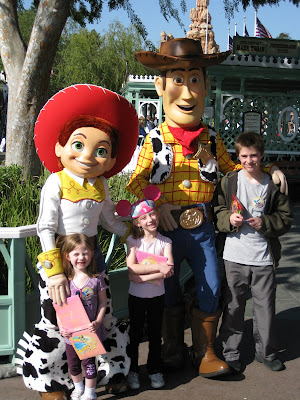 By then we were getting tired, and I wanted to have the kids see Disneyland lit up at night, so we decided to return to the hotel for some rest. I, of course, was half-tempted to let the kids stay at the hotel and watch Disney Channel while Gwen and I returned to the park ourselves and rode the rides we were denied earlier. :) But, being a good parent, we brought them back with us... heh.

Now, the first night we were there, we heard the fireworks show, but hadn't seen it... and I figured, "It's just another fireworks show, so I won't have my feelings hurt if we don't see it; plus, we'll see it after Fantasmic tomorrow..." So the original plan was not to worry about making sure we saw it. However, one of the cast members told us that if we wanted to see the fireworks show, we had to do it from Main Street, or we would miss some of the effects and fun of the show.

Well, we happened to re-enter the park just-in-time for the fireworks show; so we decided to stay with the masses gathered in front of the Castle. We're glad we did; the show is amazing. Narrated by Julie Andrews, the fireworks are put to music and the narration walks through some of the history of Disney and his vision for creating magical memories for all. There are also tie-ins with George Lucas stuff that appears at Disneyland (like Indiana Jones and Star Wars.) At one point we saw Tinkerbell fly around the castle and wave her wand to make fireworks, see huge flames shoot out the tops of the Castle during the Indiana Jones part, and see green lasers firing all around you during the Star Wars part. It's quite cool, and I'm glad we didn't miss that.

It was wonderful way to end Day 2... (except getting out of the park, carrying a sleeping 4-year-old.)