After playing the wild-goose chase for months checking GameSpot's website and all other vendors it lists as USA distributors for Nadeo's fan-freaking-tastic game, "TrackMania United" - I finally find out on the TrackMania Forums that it's been released to the USA via Valve Software's Steam engine. 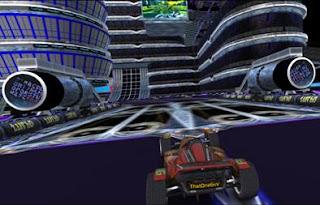 Steam is Valve's way of offering their games through online distribution. What's really cool about this is that anyone can download the game for $29.95 US Dollars. What sucks, is that I've been waiting to get my 2nd copy in DVD format. So here I sit, still going insane, with no news in sight about when the DVD version will come out.

I can still get the TrackMania United (TMU) English UK DVD via GoGamer.com but it's $37.90; so I'll wait a little longer and see if an official DVD version is released in the USA.

That One Hiatus Guy - Not By Choice

Here's the really long condensed version (I love oxymorons):
Well over a month ago, I'd scheduled to have work off for a week before Memorial Day to do all the final work in getting my house ready to sell, so we could find a larger abode to house our upcoming adventures. Well, when the time finally hit, this is what happened...

Day 1: I get approached by my excellent friend Clint, who referred me to a company he used to work for, touting an exciting opportunity in Software Development. I was compelled to go check it out... so I did so on Day 2; after busting butt to try to get stuff done on the house, and spend some quality time with the fam.

Day 2: Interviewed with ProPay and had a ball. I interviewed with four people, and luckily knew two of them from previous work experience and common friends. This made the interview much less intimdating (one against four - those odds are intimidating) and I thoroughly enjoyed it.

Day 3: Worked more on the house... helped Brennan's third-grade teacher with a dance party for their class. The festivities included an intense game of musical chairs, the chicken dance and treats with much sugar content. Fun was had by all.

Day 4: ProPay makes an offer I can't refuse. The offer puts me on my friend Wayne's development team working with new Microsoft .NET technologies which has me giddy. The salary increase will help me afford a house in Utah. The feelings at this point are bittersweet; as I already had a killer job with StayWell Interactive in downtown SLC. I now had the ever-so-opposite-of-anything-remotely-close-to-fun responsibility to turn in my letter of resignation.

I will digress now and discuss how painful this is, since I've never had to leave a job I've liked without being forced to due to lay-offs, etc. Leaving a job you don't like is easy... leaving one you do like is torture. I have some really great friends at StayWell and enjoyed my two years with them very much; and learned a lot. They will be missed. Thank heavens for instant messenger.

Back to the story...

Day 5: We find our next home. A too good to be true house in Riverton that's way bigger than we were planning on buying... whose story has to be told in another post, because it's a story of its own. It will suffice to say that we had to jump on trying to land this place or someone else was going to scoop it up. However, at this moment in time, the planets weren't aligned but we tried for it anyway.

Memorial Day (the Monday after the week off): We list our house and put our offer in on the home we felt should be our next stomping grounds. We were basically asked to come back when we had a more serious offer and didn't have a house to sale still.

Tuesday - 29 May: I drive to work with heavy heart and a letter of resignation... head still spinning from all the mayhem that took place the week before. Mustering up all the courage I had, I slowly walked the Green Mile into my boss' (friend's) office and said, "I have some bad news." He said, "I don't think I like the paper that's in your hand." We discussed things and as I returned to my other friends and had to drop the bomb there too.

Note to self: avoid doing that where possible... it's a very difficult thing to do. (Did I mention, thank heaven for instant messenger?)

Back to house stuff... and I need to digress and mention that I'll probably be writing a supplemental post regarding the spiritual aspects of this whole crazy whirlwind that has been our lives over the past month or so... that part of it has been really neat. To illustrate a little in this post, we listed our house at what seemed to be against the odds.

Our agent (and excellent friend) Trent looked up comps in our area, and while one like ours had sold in 3 days, it had been gutted and completely remodeled. Ours has had some remodeling done, but nothing like this other house. The other comps around us were still on the market and had been for 27-45 days; still not sold.

Gwen and I had both always had the feeling that our house would go quick when it was time to sell, so we listed it anyway with that in mind and still went for the house in Riverton. Well, our first sets of people came through the house on Tuesday.

Wednesday: More work on the house, more people coming to see it.

Thursday: More people checking out the house, one set being a couple that had checked it out on the first day and were making a second visit.

Friday: An offer is made on our home by said 2nd walkthrough family.

Saturday: We go under contract on our home and make a second offer on the home in Riverton we wanted.

Monday (4 June): Phone negotiations start between agents on the Riverton home and by the end of the week finally get it under contract.

Friday (8 June): StayWell Interactive graciously takes me to PF Changs for my final lunch with them... That day really sucked... it's always hard to part knowing you won't hang out with those same friends everyday anymore. I wish them the greatest of success and more good times in my absence. I know this wil be dififcult since they won't have the dry humor pun guy there making them groan with 1/2 courtesy-laughs, 1/2 gagging reflex from reaction to the jokes. They also will lack the entertainment of me sitting at my computer trying to play a video one of the other guys sent via hyperlink in an instant message and freaking out about my sound not working; only to find it was because I was instant messaging in a Remote Desktop session on my secondary monitor -- both machine's Windows Taskbars in plain sight on the monitors... good times. They will be missed.

Monday (11 June): I start my job at ProPay. The drive tanks, except for the fact that I'm driving in Orem and that means I get to see lots of UTOPIA trucks and vans around laying fiber optic lines. I've driven past apartment complexes with signs touting their being connected to UTOPIA and my heart skips a beat... then gets extremely jealous and covetous. One day... one day in my Riverton (Phase II UTOPIA City) home... I so can't wait... but I digress (imagine that.)

I've only been at ProPay 4 days so far, but what a cool crew they have over there. I've enjoyed my associations with everyone I've met so far - a very family-friendly company and the work is going to be very enjoyable.

Now we move on to the house inspections, fixing stuff up to prep for the move and all that other fun stuff.

In the meantime, I've started planning (with some neighbors) a block party for my current neighborhood. We put one on last year and it was a ball. We want to do "one more for the road" as a farewell party to have one last huzzah with all our friends before we start a new adventures in Riverton; as well as help integrate the new family into the neighborhood.

Dreyers does this really cool thing every year called "Neighborhood Salute"; where they bring free ice-cream to several block parties. We were fortunate to be selected this year as one of the lucky block parties to have Dreyers' tasty goodness to share with the friends/neighbors. It should be a riot, and we're excited (and grateful!)

In the midst of all this mayhem... I've also been running around like a head-with-its-chicken-cut-off (yes, you heard me right...) trying to finish some side work and keep the Jordan Alumni Association website up-to-date with information on the Centennial Celebration happening in less than three weeks. My latest project on it was to add a Collector Pins database to the site. Shamless plug: some of those pins are the bizzomb. I'll be trying to scrounge up money so I can see about trying to put together a set... :)

Amongst all this, we've discovered this sickening cancerous looking mass growing on my tongue.
WARNING: Clicking on the link isn't for the weak-stomachs out there... for the rest of you, I know how much you want to see my tongue, so click away. :)

I'm getting that looked at by an ENT on Monday and will, I'm sure, be getting it cut off shortly thereafter. That's a pleasant thought... knives in my mouth gouging the tool that allows me to communicate with others... and taste Dryers ice-cream.

I'm sure it's stress-invoked... but dang, kinda freaky. I'll keep y'all posted on that one as I know you're fascinated *barf* -- it merits its own post, so it will most likely get one.

Like I've told everyone else, before I've shared it with you, blog... but I'm obviously a psycho masochist who always seems to find some exposed portion of the plate to slap something else on. My family is going for the Guiness record of most life altering events in a year (or rather six-month period. Crock, we might already have it just from the last month. I take that back, we have to wait til the twins are born so we can count that... three months. Most life altering events in three months.)

I just hope I can finally poop after the 14th of July. The Centennial will be over by then, we'll be moved into our new home (assuming the planets ARE aligned now and things go smoothly.) The job transition is over and the work on getting the house sold is done (again assuming nothing goes wrong there.) -- finally Gwen and I will be able to take a breath for two seconds before the two babies arrive and make our lives crazier than they have been for the past month.

Buckle your seatbelts folks, it's going to be a crazy ride. And now blog, you understand why I've neglected you.

Obviously I'll have more later, until then... nothin' but love.