It's official! They're twins, and they're housed in a bunk-bed equipped womb.
When this picture was being taken; the top baby (lovingly referred to by the radiologist as "Baby A") had a hiccup and we got to watch its body flail up-and-down in a "break dancing/worm" like movement for a brief second. "Baby B" was just casually kicking it on the bottom bunk (literally kicking the side wall) 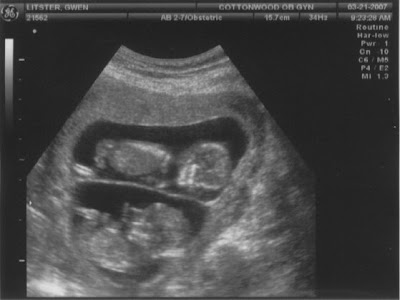 They're fraternal and healthy and happy; as are we! We're grateful to know they're growing healthy and strong; and already sapping my dear sweetheart of all her energy ... and food consumption.

You'll note that it appears "Baby A" (aka "Thing 1") is looking face-down at the "bottom bunk" where "Thing 2" is crouched in fetal position, kicking the wall to your left. "Thing 1" looks to have a highlighted jawbone, but I can't tell for sure... this is why I'm a software developer and not a radiologist. "Thing 2" has a jawbone, it appears, as well; but not near as bright as "Thing 1."

Nothing like Dr. Seuss nicknames while they're preparing to enter into their journey into the world. Speaking of names, everyone has been having a ball coming up with what we should name them.

(If they're a mixed bag)
Pat & Terry
Chris & Kelly

That is the coolest ultrasound pic I've ever seen! How exciting!

Or Mary Kate and Ashley?

Boy and Girl... Bill and Hillary

How about:
Laverne and Shirley, Spongebob and Patrick, Heckle and Jeckle, Jeckle and Hyde, Tom and Jerry, , Anna and Andy, and Dick and Jane.

I'm partial to Mark and Maxine.

Would that be creepy?

Kent and Brent if they are both boys.

Kent and Brent would rule! We'll seriously consider those names.

For those of you that don't know... my dad is a twin and their names are Kent and Brent. My uncle Kent died shortly after birth; so this would be extra special.

Thanks for the suggestion Mom... you rock!

This is so fascinating. Thanks for sharing. I am so excited for you.

I think Darryl and Daryl for boys and for girls Isabella & Olivia. If it's a mix how about Madison & Matthew.