The Return of Kim Possible 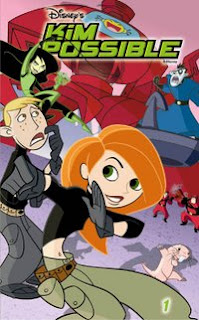 What's the sitch? The best animated series of all time is making its fourth season debut! 10 February 2007 marks the start of the extended series of Kim Possible; and the best choice Disney Channel has ever made (Making "High School Musical" was their 2nd best decision...)

BOOYA! We have devoted fans everywhere and sites like savedisneyshows.org to thank for this pattern-breaking season.

Disney has apparently had a silly pattern of stopping a series after three seasons. I don't know if it is to avoid ruining a good thing, but the fans of Kim Possible wouldn't stand for it.

All of the major voice talents are back for another season (the Save KP site is going to continue lobbying for a fifth, a DVD boxset and a theatrical film release, among other cool things as well...)

From an interview I read a while back and the promo ad which started airing on New Year's Eve, the series will be picking up where it left off after the series' finale "So the Drama." (To see the promo and find out more about the four episodes that will air... see Save Disney Shows. The URL for the promo ad is at the end of the paragraph following the episode list. It's not a hyperlink, so you'll have to copy and paste it into your browser.)

You know where I'll be on 10 February 2007... and it won't be in front of my TV (since, alas, I no longer have Disney Channel in my home... curse you Comcast for not offering the option to JUST order Disney Channel!) That's right, I'll be in watching it with my ultra-cool sis Tiff and her family that night! Double bonus.

I can't wait to see what wonderful adventures, quippy dialogue and pure fun await us during this next season. Maybe a few one-timer villains will make reappearances. I'd love to see something more from Adrenna Lynne and Frugal Lucre. And watching Drakken, Shego, Duff Killigan and Professor Dementor never gets old.

If you've never seen Kim Possible, I'd highly recommend checking out some of the episodes over the next month... then check in on 10 Februrary for the new season. It's fun for both children and adults (and children stuck in adult bodies.) You'll be glad you did.

Some episodes are available online via Disney Channel's website, iTunes and you can watch Kim Possible Saturday mornings on ABC Kids. Of course, I'm a good resource too, as we have every episode videotaped, own the existing DVDs and the iTunes episodes... (but I'm not a junkie... *cackle!*)

I highly recommend watching the Bueno Nacho episode as it sets the stage for a lot of back references throughout the series; and will give you a good feel for what the show is all about. It also will introduce you to Doctor Drakken and Shego, the villains Kim deals with the most. Enjoy! I know I will!
Posted by That One Guy at 1/08/2007 10:03:00 PM

I sure wish Comcast would allow us to stick with Basic and just add the Disney Channel. Them trying to make us pay so much more to get the bigger packages just for one or two channels that we'd watch really sucks!

KP rocks and I can't wait until I can see it season 4 shows(by VCR or iTunes :( unfortunately)

The show Kim Possible is awesome to watch! I'm glad to hear it back. Now I hate to miss any of the action! Since people are always on-the-go now you don't have to miss your favorite shows if you subscribe to DISH Network like I do and get their Sling box! It really is TV everywhere, so now you can stream live TV content onto your iPhone or even laptop wherever you are. As a DISH employee I can tell you that COMCAST is planning on providing that ability but not until later this year! You should really check out DishNetwork.com for more info.