Going through some pictures today, I discovered some pictures I had taken of some maps I'd drawn up while playing through a couple of Role Playing Games (RPGs) I was into right after I married Gwen. 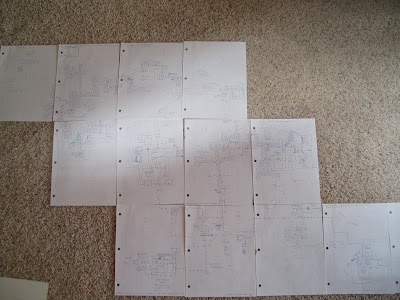 It's a fun kayak trip down the Nostalgia Nile... and I tell you, it's certainly not like it used to be anymore. In the old days, half the fun of the game was drawing up these things while you played through. Sure, walkthroughs were available on Bulletin Board Systems (BBSes) but the maps weren't.

The map above is of a game called Times of Lore. Incidentally, while looking around for links to the game, I found these maps... puts my maps to shame, but I still think mine are cool (no matter how inaccurate they might be compared... Hey, they got me through the game, so they're good for something!)

The map below is of an area of Phantasie III (screenshots), a game I used to play tons in high school with my friend Russ. 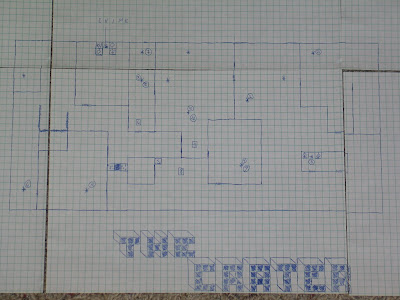 Now with the advent of Massive Multiplayer Online Role Playing Games (MMORPGs), especially World of Warcraft (WoW)... there is such a wealth of information online about the game (including character stats, guild forums, etc.) that the "world" of the game involves much more than actually playing the game. It's much more involved (and costs a lot more money) than I'd care to indulge in... but it's enough for millions of others.