Celebrating the Release of "Camp Rock" and Kimmie - Our Rock Star 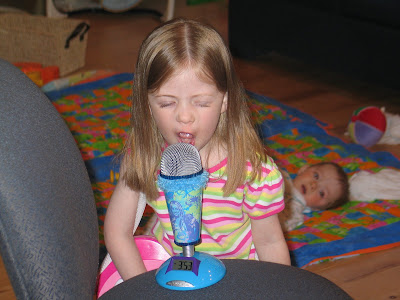 Weeks before the movie's debut on Disney Channel, Kimmie would frequent the web site, listen to and memorize the music.

Gwen captured Kimmie in the moment while belting out the lyrics from one of the songs! I didn't get to witness it first-hand until we watched the movie on ABC the night after the debut. During the final two songs of the movie, Kimmie jumped up and started dancing around singing with the movie. She rocked. We enjoyed.

And now we'll get to do it again with the DVD.

If you (and/or your kids) enjoy the Jonas Brothers, you'll have fun with this movie. The music is catchy and the message is about being true to yourself and your friends. Give it a shot if you haven't.
Posted by That One Guy at 8/18/2008 10:26:00 PM