As Sisters in Zion

I had the blessed opportunity to live in a little piece of heaven known as Big Stone Gap, VA and Wise, Virginia (southwest corner) for about 6 months of my life while serving in the Tennessee Knoxville Mission (TKM) during the latter-half of 1993.

While there, I fell in love with the people there, including Bishop Yates' family. We had some special times while I served there and I miss them dearly. They and their extended family "adopted" me while I was there. I spent 6 months in their ward, and for 3 of them, kept guessing I would get transferred the next month. My final month there, some of the members joked that if I didn't get transferred that time, I would become the ward's next Bishop. Too funny.

In this post, I'll be focusing on the Yates' oldest daughter, Courtney and her youngest sister, Kristen.

Kristen was 4-5 years old at the time, and one of the cutest little girls I'd ever met. As you can see from the back of the picture of me holding Kristen, her family (including extended family) and I used to joke around about Kristen being my future wife. :)

At the risk of embarassing them (bless their hearts, nothin' but love!!!) this is what we all looked like back then:

So I'd tried and failed twice to hook up with their family while they made two sojourns to Utah for weddings of sisters between Courtney and Kristen.

Luckily, I found Kristen on Facebook a couple of months ago (thank heavens for modern technology!) As we started catching up with each other, I discovered she is currently at BYU. Of course, I had to invite her for dinner, so I could catch-up in person, being as I haven't seen her in 15 years, not to mention I'd like to pay back at least a small inkling of what her parents did for me while I was serving my missin in Wise!

We planned a "dinner appointment" and I brought her to my home on 22 March. The cutie I knew back then has blossomed into a beautiful young woman her parents can be proud of. I was so happy to see her, to hear that she's strong in the Gospel of Jesus Christ, and happy.

We talked, looked through some of my mission pictures, ate dinner, played Apples-to-Apples with the fmaily, watched "It's Latter-Day Night" (well, most of it... it locked up on us during the last act) and had a wonderful time. Talking with her, hearing that Southern accent, took me "home" to my mission long ago; so many dear friends that I long terribly to see more now, than ever. (Now, there is more to the story of this night, but I have to wait until later to tell it; for reasons that will reveal themselves then.)

After taking Kristen home, I wanted to detour to the airport and fly out to Virginia. I was hoping to see her again soon, and got my wish earlier than I thought would happen. I learned that Courtney (who now lives in Arizona) was coming up two weekends later to go to General Conference with Kristen. Selfishly, I begged them to come to my homs for Sunday dinner again, so I could see Kristen again and Courtney for my first time in 15 years.

Oh, the trip we took down memory lane; sweet nostalgic goodness. We laughed about all the goofy things we used to do when I got to spend time with their family (I had an electronic whoopee cushion, we played fun mind games with the kids, etc.) There was one time they reminded me of when I was with their "mamaw" (grandma) who happens to be a germaphobe and I love to life (which, for the record, is a bit better than loving someone to death.)

I put a big glob of lotion into some tissue when she wasn't looking. I then pretended to sneeze into it when she was looking, and showed it to her afterward. I'm rotten to the core; but what can I say? Boys will be boys. Good times.

Back to the story. I got to catch up with Courtney, hear about her awesome adoption of a beautiful baby from the Ukraine, learn of her family in Arizona where she is also strong in the Gospel. I was happy to hear about friends back in the Powell Valley ward, sad to hear about some unfortunate things that happened in some of their lives, but overall wanting even more to return and spend more time with those wonderful friends.

We ate gabbed and gabbed, ate dinner, played Phase 10 with the family, feasted on Gwen's world-famous chocolate-chip cookies, and re-watched a new copy of "It's Latter-Day Night" that wouldn't freeze up on us.

I was sad to see it end, but again, the night drew to a close and Courtney and Kristen had to head for home. They either had a good time, or would good sports and humored me when it was time for pictures.

So you've seen the before, here is the after (Note the Celestial glow beaming from the ladies; I'm not worthy to be that close to any of them...): 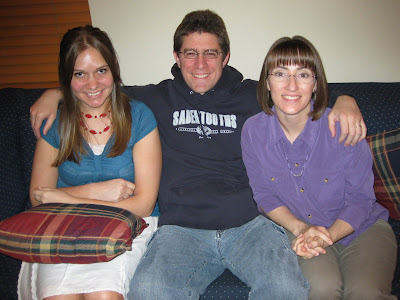 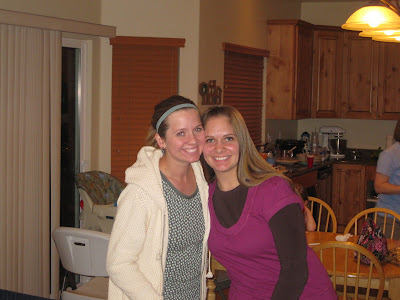 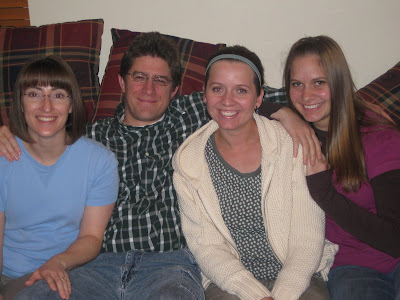 I'm grateful Courtney and Kristen were kind enough to bless me and my family with their presence, sacrificing their short time together to come patronize my need for nostalgia. :) I sure hope I'll get to see the rest of the family soon *NUDGE NUDGE*

I'm seriously tempted to buy airline tickets to fly out there for a weekend soon. I'm dying to visit!

This was another one of those times where I'm reminded that this life is all about people. We don't get to take anything with us but the knowledge we gain here and the relationships we build with people.

Tread lightly and handle those relationships with care. Don't waste a moment, because you'll treasure them later, even some of the bad moments. I'll never forget those I left in that small corner of Virginia. As Courtney and Kristen were in my home, we repeatedly said how floods of memories came back, as if it were yesterday. It's amazing what a few minutes with someone you haven't seen in years will do for you. So much happiness filled my heart. It always does with reunions like these.

Keep that in mind next time your High School, Mission or other reunion comes around. Too many times, I talk with friends who have no interest in going, but don't know what you're missing. Try it, you'll be glad you did.

Thanks, Courtney and Kristenl "Ah love ye!" And thanks Mom and Dad Yates for raising such a wonderful family, and sharing yourselves with me! You've officially stolen a part of my heart, and I send my love to you. God bless!
Posted by That One Guy at 4/06/2009 11:59:00 PM

Oh (Elder) Litster we were definitely not humoring you. We had so much fun with you, Gwen, and your kids...seriously!
We are very grateful that you invited us into your home, and thanks for all the wonderful things you said about our family.
Your family is awesome too!!

And as I said before, your most welcome in my home anytime (and we expect you to take us up on that.) heh!

How, fun, for all of you. Remembering the good ol' days can be fun.

Not to change the subject or anything, but Mom said you guys went to Disneyland. I want to hear about Disneyland.

That was fun! I can vouche for Jeff, he's so right about the Yate's sisters. :)