What Time Is It? Time for High School Musical 2!!!

Last year, Disney Channel introduced the worldwide hit, "High School Musical." I don't think anyone really had any idea what a huge impact this fantastic film would have... 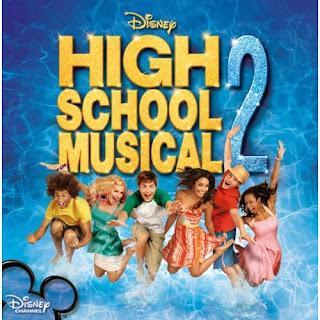 My family and I fell in love with it and are ecstatic and full of anticipation for the sequel, which debuts on Disney Channel this Friday.

The soundtrack for "High School Musical 2" was released today in stores, online through various avenues including Amazon and iTunes. We pre-ordered through iTunes so we could score some bonus stuff like a music video and two digital booklets including lyrics (some/all of these are available through some of the other purchasing avenues as well...) I downloaded my copy after midnight so my family and I could enjoy it all day today.

Needless to say, the music has permeated the walls of our home, my car and my headphones at work. It has us even more excited for the movie.

The music from both films is catchy; and watching the films make the music have emotional attachment on top of the desire to hear it simply because it jams.

The movie has an incredibly talented and lovable crew (well, 'cept Sharpay... you want to hate her; because the talented Ashley Tisdale plays a very believable snob.) that has wormed their way into the hearts of people everywhere.

If you don't have access to Disney Channel this Friday, find someone that does and hook up your High School Musical party. You'll be glad you did.

Oh yeah, if you haven't seen the original, I'd HIGHLY recommend you do that first. Did I mention, you'll be glad you did?!

Be warned, the songs will get stuck in your head, and soon you'll find your money disappearing into the revenue machine that is High School Musical media. :)

Rumor was that a High School Musical 3 was being planned for a theatrical release on the big screen. I found out tonight from the IMDB that its been officially announced! Looking forward to that...